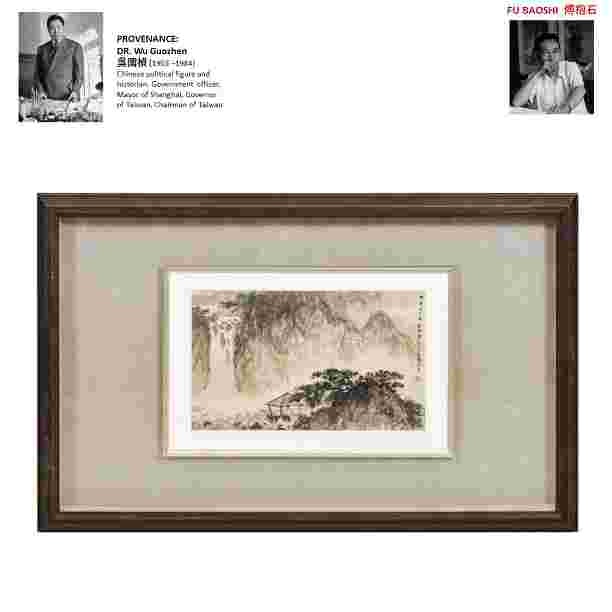 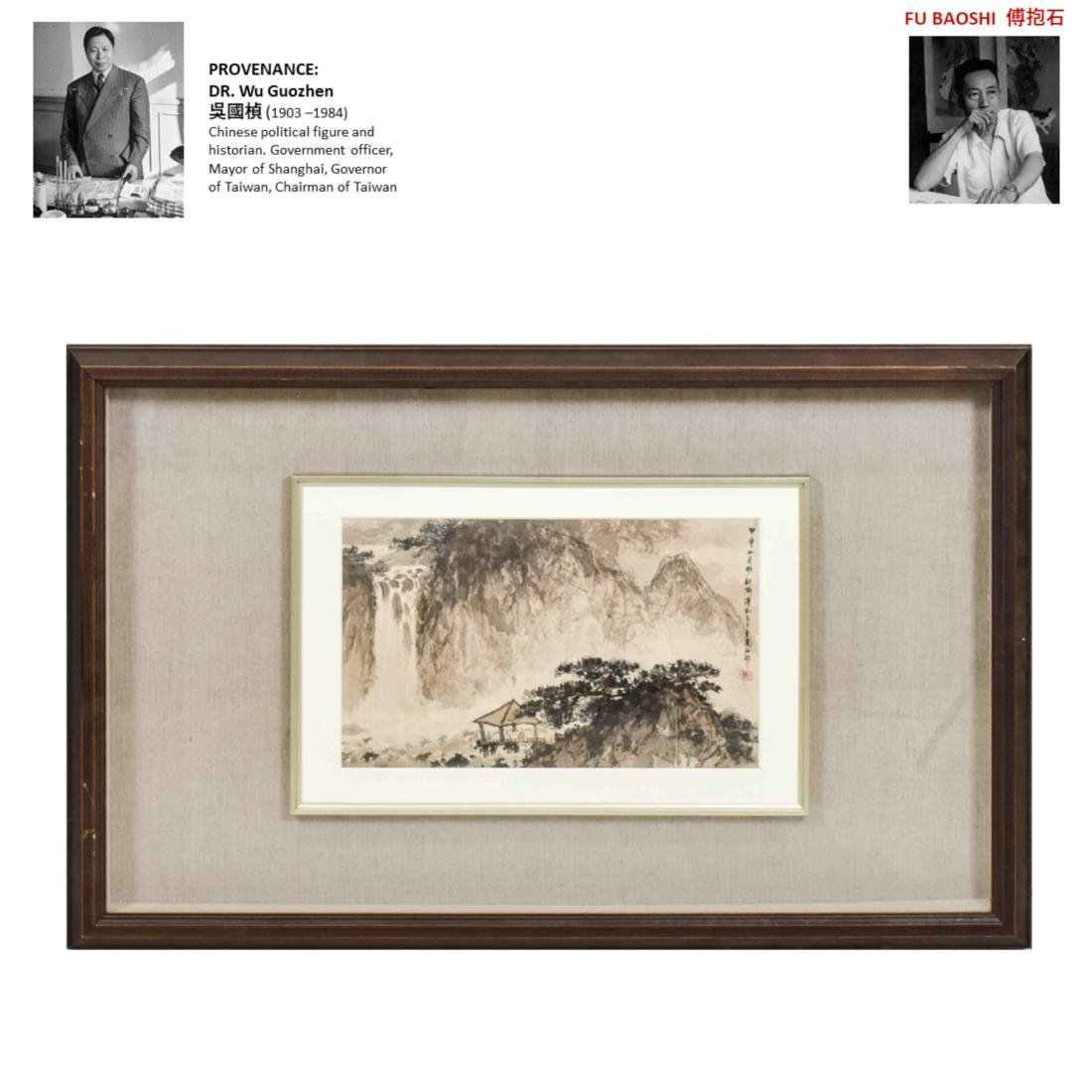 Fu Baoshi (傅抱石; 1904-1965) Framed Chinese traditional painting, ink and color on paper. Signed and dated, in the Fourth day of ninth month in Jiashen year (ca. 1944)Breathtaking Ink painting of a surging waterfall cutting through the heart of a mountain. Fu Baoshi was educated in Tokyo Japan and his art was inevitably influenced by Japanese techniques. Known for his stippling and combination of various brush strokes Fu Baoshi created some of the most dynamic images of his time. His ability to capture his subject outer appearance while conveying its inner truths is evident in this piece. By varying the gradation of ink, a misty effect is produced, and the illusion of moving water is created. The impression of mist and water lend to the ideas of the heavens, and the idea of balance between hard stone cut by rushing water. The composition is made up of several layers moving the viewers eyes from top to bottom or vice-versa. Combining beautiful technique and composition begs the viewer to look beyond the surface. A column of characters line the top-right corner, and a single red seal. Matted, and wooden framed, set behind glass.

LOT NOTES:
Fu Baoshi (傅抱石 1904-1965) or Fu Pao-Shih, was a Chinese painter from Xinyu, Jiangxi Province. He went to Japan to study the History of Oriental Art in the Tokyo School of Fine Arts in 1933. He translated many books from Japanese and carried out his own research. In painting itself, he brought Japanese visual elements to the Chinese ink painting tradition.
He was the Director of the Jiangsu Province Chinese Painting School and a Vice-Chairman of the Federation of Chinese Artists. He also taught in the Art Department of Central University (now Nanjing University). His works of landscape painting employed skillful use of dots and inking methods, creating a new technique encompassing many varieties within traditional rules. He was able to create an old, elegant style through his integration of poetic atmosphere and painting techniques. He has held many personal exhibitions in China and has won favorable comments.
Fu had strong feelings towards the land of China. During his travel to many places, he recorded the splendors of the rivers and mountains, drawing inspiration from nature and becoming the representative landscape painter of his time.
Fu wrote numerous fine arts theses, the earliest of which, "On the Evolution of Chinese Paintings", was written at the age of 25. He also carried out in-depth research into the history of landscape painting at the end of the 4th century BC, including the works of Gu Kaizhi of the Eastern Jin Dynasty (317-420), Zhan Ziqian of the Sui Dynasty (581-618) and Jing Hao of the Five Dynasties Period (907-960), as well as Wu Daozi, Li Sixun, Li Zhaodao and Zhang Yanyuan of the Tang Dynasty (618-907). He worked very hard to imitate paintings by Gao Kegong and Ni Zan of the Yuan Dynasty (1271-1368) Chen Hongshou of the Ming Dynasty (1368-1644), and Cheng Sui, Kun Can, Zha Shibiao, Gong Xian, Mei Qing, Wui Li, Yun Shouping and Shi Tao of the Qing Dynasty (1644-1911), finally becoming one of the master painters of his age. In this capacity he succeeded Huang Binhong, who had created a new style of landscape painting called "Baoshi wrinkle" basing on the cattle-hair wrinkle of Wang Meng of the Yuan Dynasty.
As well as painting landscapes, Fu Baoshi was also an accomplished painter of figures. His paintings of ancient Chinese figures from the 3rd and 4th centuries BC are particularly acclaimed.
As a leader of the so-called New Chinese Painting Movement, which reformed traditional Chinese painting after 1949, Fu stood out from most of his contemporaries with his great passion for art, and his innovative brushwork and unique picture composition.