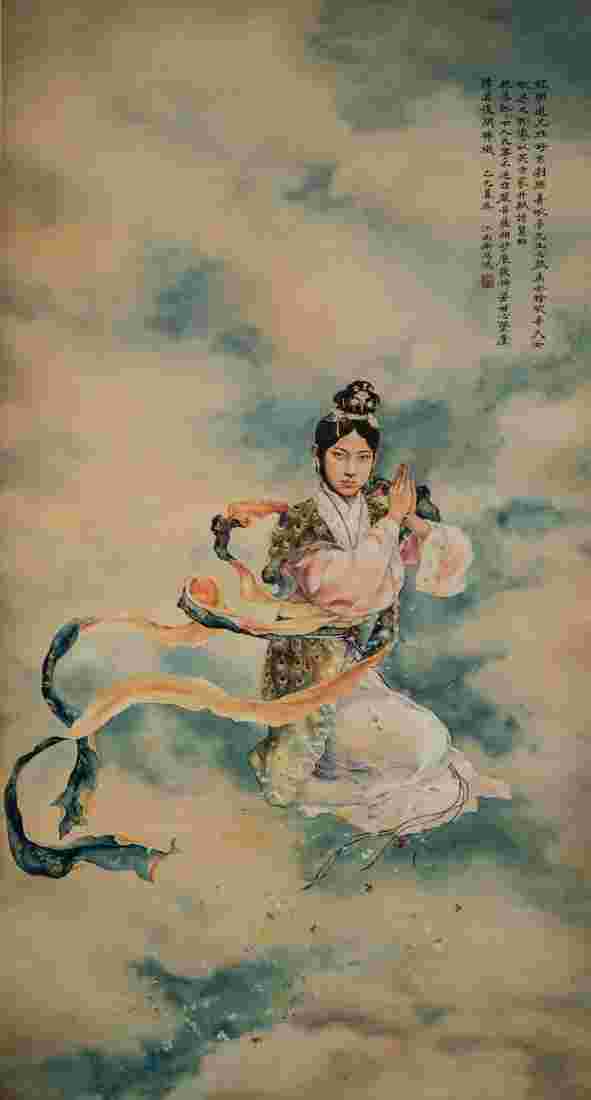 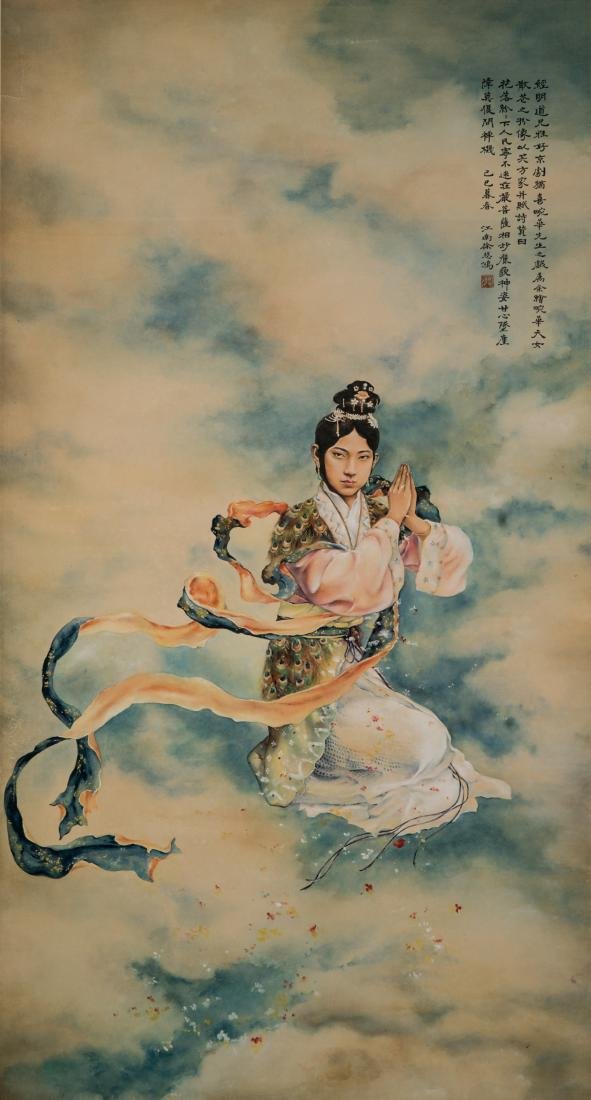 Xu Beihong (徐悲鴻 19 July 1895-26 September 1953) Chinese scroll painting, ink and color on paper laid to silk, hanging scroll. Signed and dated, in the late spring of Jisi year. (ca. 1929).
Title: MeiLan Fang
A painting of rich quality and refined technique, by Xu Beihong (1895-1953). Raised in Yixing, Jiangsu province. He was chiefly known for his Chinese ink paintings of horses and birds and was one of the first Chinese artists to be in favor of Chinese art to more representative of the 20th century. He was also viewed as one of the first to create colossal oil paintings with classic Chinese themes. Xu Beihong possessed great skill concerning modern western painting techniques. The painting of the famous opera star MeiLan Fang is a true representation of such modern techniques. This painting captures one of the most famous Peking opera artists in modern Chinese theater, Mei Lanfang (1894-1961), takes a prayerful pose against a spiritual mist backdrop. This painting is truly a masterpiece.


LOT NOTES:
Xu BeiHong (徐悲鴻 19 July 1895-26 September 1953) was a Chinese painter born in Yixing, Jiangsu province. He was primarily known for his Chinese ink paintings of horses and birds and was one of the first Chinese artists to articulate the need for artistic expressions that reflected a modern China at the beginning of the 20th century. He was also regarded as one of the first to create monumental oil paintings with epic Chinese themes - a show of his high proficiency in an essential Western art technique.
Xu began studying classic Chinese works and calligraphy with his father Xu Dazhang when he was six, and Chinese painting when he was nine. In 1915, he moved to Shanghai, where he made a living off commercial and private work. He travelled to Tokyo in 1917 to study arts. When he returned to China, he began to teach at Peking University's Arts school at the invitation of Cai Yuanpei. Beginning in 1919, Xu studied overseas in Paris at the Ecole Nationale Suprieure des Beaux-Arts, where he studied oil painting and drawing. His travels around Western Europe allowed him to observe and learn Western art techniques. Xu Beihong still wrote regularly for the Daily University of Peking University that dealt with wider issues then just campus politics. Xu addressed issues of Art and Art History and in 1920 a university art journal called Painting Miscellany was published.
In 1933, Xu organized an exhibition of modern Chinese painting that traveled to France, Germany, Belgium, Italy, and the Soviet Union. During World War II, Xu traveled to Southeast Asia, holding exhibitions in Singapore and India. All the proceeds from these exhibitions went to Chinese people who were suffering as a result of the war.
Galloping Horse
After the founding of the People's Republic of China in 1949, Xu became president of the Central Academy of Fine Arts and chairman of the China Artists Association. Xu Beihong was a master of both oils and Chinese ink. Most of his works, however, were in the Chinese traditional style. In his efforts to create a new form of national art, he combined Chinese brush and ink techniques with Western perspective and methods of composition. He integrated firm and bold brush strokes with the precise delineation of form. As an art teacher, he advocated the subordination of technique to artistic conception and emphasizes the importance of the artist's experiences in life. Of all of the Painters of the modern era, it can be safely said that Xu is the one painter most responsible for the direction taken in the modern Chinese Art world. The policies enacted by Xu at the beginning of the Communist Era continue to control not only official Government Policy towards the arts, but they continue to direct the overall direction taken in the various Art Colleges and Universities throughout China.
Xu constantly pushed the boundaries of visual art with new techniques and international aesthetics, in bid to reinvent Chinese art. In fact, Xu's influence extends beyond China in the early 20th-century. Many pioneer Singapore artists such as Chen Wen Hsi, Lee Man Fong and Chen Chong Swee looked up to him as a mentor and a worthy peer, sharing Xu's advocate to closely observe nature and inject realism into Chinese painting.
Xu died of a stroke in 1953. After his death, a Xu Beihong Museum was established at his home in Beijing.