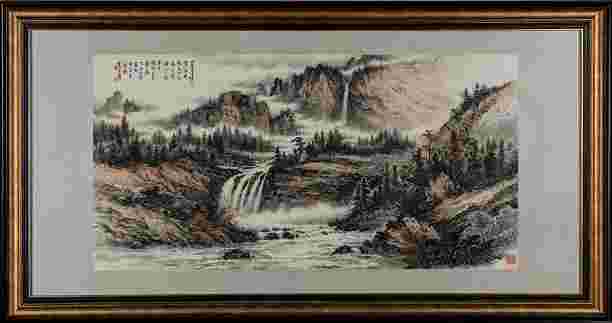 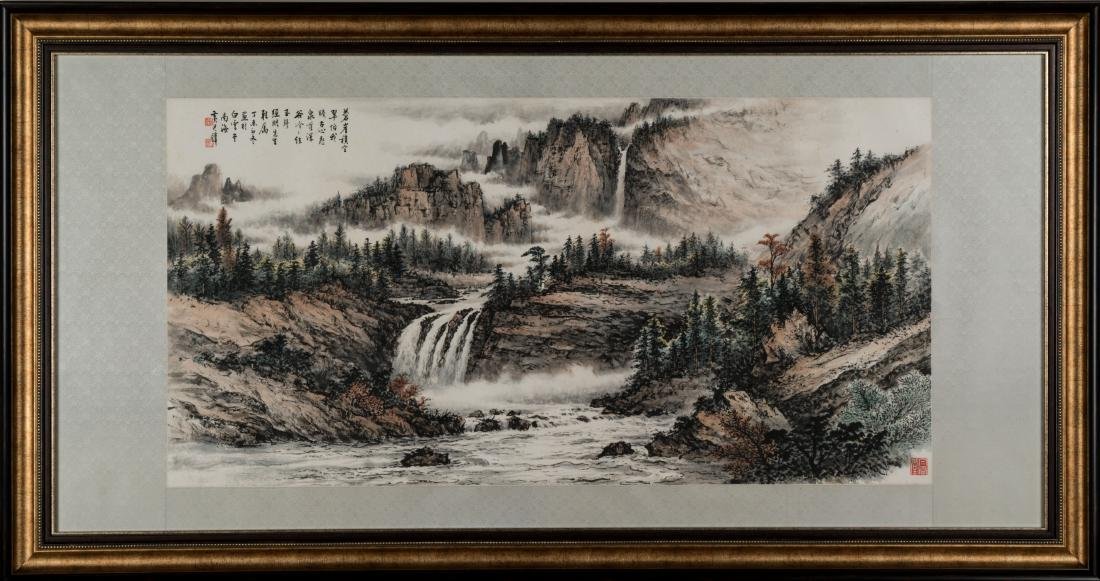 Huang Junbi (黄君璧 1898-1881) framed Chinese traditional painting, ink and color on paper laid to silk, signed and dated. In the winter of Dingwei year (ca. 1967) as a gift for Mr. Wu Guozhen father, Wu Jingming.
Title: Cascading Waterfall
Breathtaking rendering of a marvelous landscape painted by Huang Junbi (1898-1991). Painted in the guohua or traditional Chinese technique, which does not conform to the artistic practices of the west, such as proper perspective and lighting methods. This painting is broken up into sections by wispy cloud-form revealing immense mountain peaks stretching toward the heavens. The sectioning of this painting allures the eye across the piece, giving the viewer a chance to journey through the landscape rather than focusing on a singular point. Huang received tutelage from the master painter Li Yaoping who directed him in the study of traditional technique. This painting bears witness to Huangâ€™s mastery of traditional brush strokes, wash, and fine detail. Green coloration can be seen in several outcrops of foliage, lending a certain liveliness to the work. Semi cursive script is found in the top-left corner, written with precision and acuity matching the brilliant execution of the landscape. Three Vermillion-red artist seals are placed without disturbing the balance of the painting. Matted on grayish silk, wooden framed, and set behind glass.


LOT NOTES:
Huang Junbi (黄君璧 1898-1881) was born in the then town of Nanhai, which is now a district of Guangzhou city. His talent for drawing and painting was formidable from a young age. He began studying classical Chinese painting from the master artist Li Yaoping when he was 22. Yaoping taught Huang in the traditional way, with strict obedience to the master and hours of copying masterpieces.
The study of Occidental art was encouraged by the Chinese government at this time, and Huang himself was most interested in learning about the styles and techniques. So he joined the Chu-Ting Art School that taught Western painting in 1922.
Huang joined the Gui Hai Painting Cooperative that had been formed by Deng Fen in Guangzhou in 1923. A few years later, in 1929, he became one of the co-founders of the Yue Society in the city. He concentrated on making landscapes during these years, and it was the intermingling of Western and Chinese styles that made his art quite unique at the time. His work was becoming more and more popular, and he was appointed to teach at the Chinese Painting Research Society in 1932. This was the beginning of a long teaching career.
In 1934, the Guangzhou municipal government decided to send Huang to Japan with the aim of learning art education. A few years later, he moved to Sichuan, and was appointed head of the Chinese Painting Department in Chongqing in 1942.
Huang decided to leave Mainland China in 1949, and moved to the newly created Republic of China, namely Taiwan. It was here that he really came into his own as an artist. He was immediately hired to teach at the National Taiwan Normal University when he arrived, and was a co-founder of the Department of Fine Arts of which he was the director for more than two decades.
Huang believed in training teachers in order to have better students. He spent a lot of time and effort in making sure that the quality of the teachers at the university was EXCELLENT, and academic research was encouraged. He had a system of five steps for teaching. It started with demonstrating personally what one wanted, followed by showing works to the students who were then given detailed explanations of the work they were being shown. The students were then expected to make their own sketches, and finally they were encouraged to be creative and innovative in their work.
Apart from teaching, Huang painted prolifically. According to his daughter, the artist Huang Xiangling, he painted every single day, and worked extremely hard for both the university and his students.
The Later Years
In 1957, Huang travelled to the United States for the first time. Three years later, he was invited to visit again, this time as a Fellow of the Brazil Arts Institute based in Houston, where he spent several months. He made a third trip in 1966, and a last one in 1969.
Huang retired from teaching sometime in the early 1970s, by which time he himself was more than 70 years old. The artist fell ill and died in Taipei in 1991.